The lineage of the Riobóo is rife with university chairs, inquisitors, judges, royal lawyers, bishops, colonels, knights of the Order of San Juan, military officials, etc., as well as possessing close ties to the Archbishopric of Compostela. Riobóo is therefore one of the great houses of the Galician nobility which has enjoyed a strong influence in the region since medieval times. It is one of the few families that has preserved its heritage from generation to generation, keeping the surname Riobóo thanks to assigning succession to the eldest son. The history of this family dates back five hundred years, and spans up to the present.

THE ‘AYO,’ THE FIRST RIOBÓO

The Riobóo began their journey as a great noble house in 1456, when Berenguela Sánchez de Moscoso, daughter of the Count of Altamira, marries Gómes de Riobóo Vilardefrancos, the vassal (‘ayo’) of the Moscoso clan who served as the administrator of the Castle of Allo in his absence. Gómes was born in 1430 in San Martiño de Riobóo, son of the House of Pardiñas Vilardefrancos, a noble family of the Bergantiños region. After the destruction of the fortress of Altamira by the Catholic Kings, the Riobóo couple moves to lower lands and begin the construction of what will come to be the first Galician manor house on the existing site of the ‘old house’ or ‘house of [the] allo.’

ALONSO, THE BUILDER OF THE NORTH TOWER

The heir to the marriage, Alonso Gómes de Riobóo y Vilardefrancos, born in 1460, was the first Lord of Allo officially. This title not only reflected the aspirations of the Altamira and Riobóo family in their construction of the building, it also granted jurisdictional powers in their territory; They had the power to administer justice and send those condemned to prison, if necessary. Under the supervision of this Riobóo, as well as his son of the same name, works on the Casa do Allo were finished and the North Tower was constructed, reaching completion in 1512. 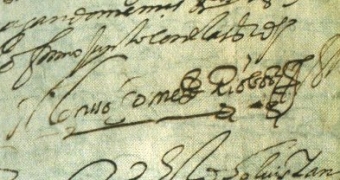 The son of Alonso Gómes de Riobóo y Vilardefrancos II, married to Inés Mosqueira, was born in the 1620s: Gomes de Riobóo Vilardefrancos, ‘el Viexo.’ This Riobóo was the impulse behind the construction of the Church of San Pedro do Allo which would replace the parochial chapel of Santa Maria de Lamas, in the area of Soneira—although he would not live to see finished work, dying in 1578 prior to its completion. Gómes ‘el Viejo’ was the one that established the first-born of the Allo in the family of the Riobóo. Also called primogeniture, it hearkens back to old Castilian law which requires that the assets of the family must remain united to be able to inherit them. This is how Torres do Allo manages to pass from Riobóo to Riobóo without being divided or parceled out among its various descendants. The family inheritance was passed onto the eldest son after the father died, in such a way that the lineage’s properties could only increase.

This Riobóo, son of the aforementioned Riobóo, would be the first first-born successor of the Allo. Gómes de Riobóo y Vilardefrancos ‘el Mozo’ married to Leonor Varela de Dubra, from the House of Arixón, was born around 1540 and was a victim of the plague, so abundant in the Europe of that century. Apparently ‘El Mozo’ was one of the most belligerent of the Riobóo, participating in wars and battles defending the crown against the Moors of Granada. In the family’s private archives there is a suit with the Count of Altamira and his Ministers, for having kicked them out of his lands, alleging his lordship rights. Gómes de Riobóo ‘el Mozo’ also participated in the defense of A Coruña, under attack in 1589 by the Englishman Francis Drake. It is to him that we owe the completion of the construction of San Pedro de Allo, where he was buried in 1600.

ANTONIO AND SONS, BUILDERS OF THE SOUTHERN TOWER

In 1644 the fortune of the lineage of the Riobóo Vilardefrancos experiences a positive turn. It is the year that Antonio Gómes de Riobóo Vilardefrancos is married to Maria das Seixas y Losada, heiress of the wealthy House of Cabanas, and thereby acquires the status of nobility. The lineage of the Seixas possessed lands stretching from the estuary of Betanzos to the County of Villalba. Additionally, the brother of Maria was Francisco das Seixas y Losada, first bishop of Salamanca, later named by Carlos II to be archbishop of Compostela. With this union the Riobóo make a qualitative leap in their titles and quantitative one in terms of their wealth. Antonio de Riobóo, thanks to this status, begins the renovation of the Torre Viexa and the extension of the house so as to form the central body that we know today, with the façade of the Egás School. But Antonio’s pretensions do not end there. He also begins the construction of an urban dwelling in Santiago de Compostela that we can find today as the number 6 of the Cantón do Toural. 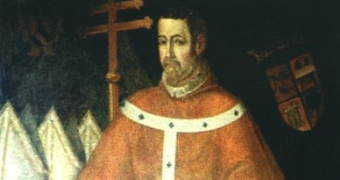 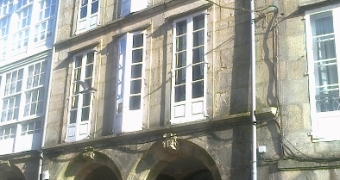 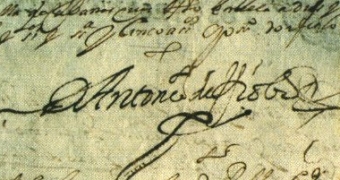 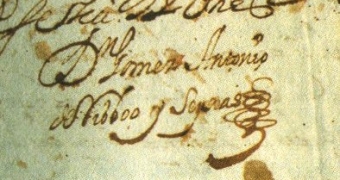 His son Gómes de Riobóo y Seixas, would continue his father’s remodeling and undertook the construction of the Torre Nueba in the image of the other tower, forming the sublime architectural set that we know today. During the long life of this Riobóo who died in 1732, there were also many annexed constructions built in the Allo that are conserved to this day, such as the granaries, porches, mills, houses of Curro, the dovecote, the baroque garden, and the San Ramón fountain. This important expansion testifies in large part to the financial muscle that the Roibóos came to have after their alliance with the Seixas de Cabanas family. 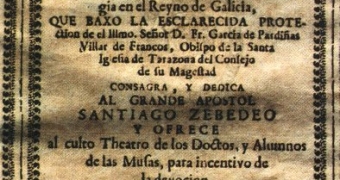 The Most Prodigious Boat poem

His brother was the important writer and biographer Antonio de Riobóo Seixas Vilardefrancos. Antonio ‘the historian’ became an honorary member of the Royal Academy of History, to which he was inducted in 1748. He is also known for being the author of the sacred poem about the Sanctuary of the Virgin of the Barca called “The Most Prodigious Boat.” He is of course also the author of many of the writings that have been preserved with regards to the House of Riobóo.

In 1775, the Torres do Allo are inherited by Nicolas Maria Riobóo, Becerra, Varela y Seixas, still a minor. A sailor by profession, named Knight of the Royal Armory of Ronda, he was one of the most culturally restless of the Roibóo. Influenced by the intellectual renewal movements of the French Enlightenment, he participated as a founding member of the Economic Society of Friends of the Country of the Kingdom of Galicia in 1784 in Santiago de Compostela—a philanthropic institution that launched Schools of Arts and Crafts, Letters, Academies of Drawing and Modeling, Schools of French, Commerce and Administration, the Music Conservatory, and even a Chair of Agriculture. 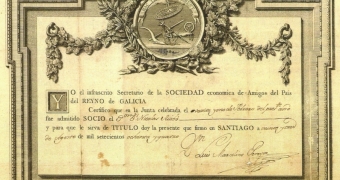 In 1868, the succession of male heirs is broken when Francisco de Riobóo leaves his testament to his only daughter Francisca. She is therefore the first woman to inherit the lands of Allo. Nevertheless her first marriage is with her cousin Nicolas of the Order of San Juan, son of the Marquis of San Isidro, in order to perpetuate the Riobóo lineage. He dies in 1869 without descendants. Francisca de Riobóo Álvarez then marries the famous naturalist Víctor López-Seoane (see the Letters to Darwin section), and the Pazo do Allo takes on a new and unexpected life with numerous tree plantations and landscaping.

After the death of Francisca de Riobóo, already in the twentieth century, the tradition of primogeniture was broken. This had established that all property would fall on the oldest of descendants in order to keep the familial heritage united. In 1920 the lands of the Allo are distributed among the descendants Francisco, Sara, and Luís López-Riobóo, along with possessions in Cabana and Bidueiro that comprised estates and inheritance that were spread across 48 municipalities. At that time, Allo had about 230 inhabitants and a national school for children, where coincidentally the mother of the great poet Manuel Antonio was a teacher. We owe the preservation of the important historical document of the Riobóo Family Archive to Luís Pardo López-Riobóo, the son of Francisca and currently a prestigious lawyer, and to his cousin Rafael.