Arriving at the Torres do Allo through the oak grove at the entrance to the manor house is a genuine delight to the senses. An endless succession of centennial oaks greets our passage on both sides of the road. It lends a feeling of traveling through an emotive time tunnel accompanied by each magic silhette sketched by the leafy branches. It is a natural door, alive and mysterious, conceived almost as a rite of passage for reaching the calm needed to contemplate the solemnity of the Pazo do Allo. We enter this avenue of oaks from the 21st century and, passing through the manor house gates, arrive in the fifteenth century. 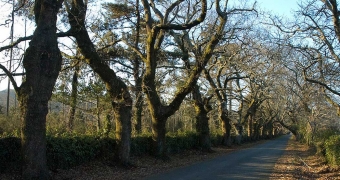 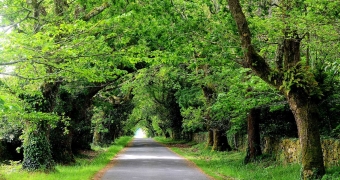 The oak grove of the Allo was designed by the internationally renowned naturalist Víctor López Seoane, owner of the manor between 1870 and 1900. Member of the Spanish Society of Natural History and the Provincial Council of Agriculture, Industry and Commerce; Lopez Seoane was an exceptional botanist whose work on carnivorous plants is particularly noteworthy. This access road to the house would have been designed with the recent inauguration of the road between A Coruña and Fisterra in mind, which is today one of the most frequented routes for visiting the Costa da Morte. Leading up to the house, it is composed of 150 year old oaks and white maples, known colloquially as ‘false bananas.’ The visual and sensorial impact produced by the light and shadow-play projected along its way prepares us to openly enjoy the Pazo do Allo’s idyllic surroundings.