The chestnut grove of Allo constitutes one of the most outstanding landscapes and natural treasures of the area surrounding the manor: a lush chestnut forest that was a food reserve when chestnuts were a staple of the population’s diet. Additionally, these chestnut trees made up a biological reserve for indigenous species of plants and animals of all kinds. It’s a place to calmly enjoy on hot days under the thick shade of trees.

Chestnut trees are more than just beautiful and productive trees. They are an inseparable part of the country’s history, culture and diet. Before the arrival of the potato from the Americas, the chestnut was the food staple of the Galician people. Thus, it is a product of ethnographic value full of fantastic tales and legends. Some of these magical stories say that in the groves there are hidden treasures but that they shouldn’t be sought out because finding them would invoke misfortune and calamity. A similar legend has inspired one of area’s most enjoyable celebrations at the end of August: the Festival da Carballeira de Zas. 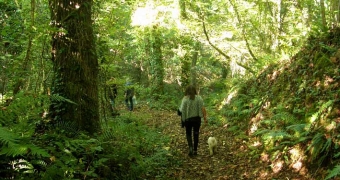 In the Torres do Allo, a grove of this size most likely served a purpose beyond the collection of its fruits. The noble wood of the chestnut was probably used to build the furniture for the rooms of the entire house. Large halls, corridors, offices, bedrooms, and other rooms would have been filled with high quality furniture made from the tree trunks of the Allo’s chestnut grove.