The facade of the Pazo do Allo is of a first-class architectural order. Its design continues the project beeing with the Torre Viexa, isabeline’s style, maybe were entrusted to workers of the Egás School, architects who had also built the Royal Hospital of Santiago de Compostela, now converted into a hotel, the Parador de Santiago. Known as the Hostal de los Reyes Católicos and located in the Obradoiro square in Santiago, its Renaissance façade served as a model for the Torres do Allo manor house. Gómez de Riobóo, a driving force behind the construction of the south tower and of extending the old ‘strong house’ to the central body that we know today. Married Maria de las Seixas and Lousada in 1644. She was an important noblewoman from the House of Cabana, and the sister of the Archbishop of Santiago de Compostela, Francisco de las Seixas y Lousada. 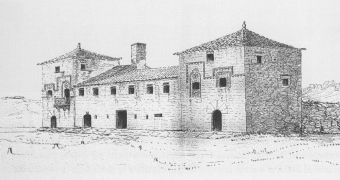 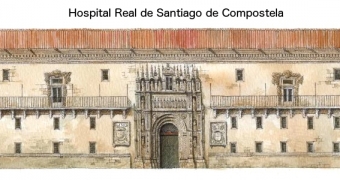 Drawing of the Royal Hospital of Santiago de Compostela 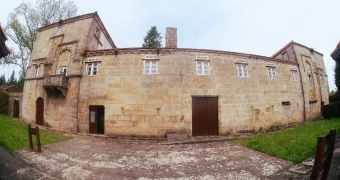 We can consider the façade of the Pazo do Allo as Renaissance, although it represents in itself a melting pot of styles of important artistic and historical value. The Egás School’s desire for architectural renewal, influenced by the Italian school, causes them to assume Renaissance postulates seeking classic order and proportions, leaving the tendencies of the late Gothic behind. Nevertheless, decorative elements remain on the Allo’s façade which can be considered to fall within the Flamboyant Gothic, part of a project contained by the Isabelline style. The front of the building shares similarities with the old Royal Hospital. In addition to a cornice containing drainage gargoyles that fulfill their function and confer a degree of majesty to the whole, we also find baroque elements such as the balcony of the south tower—of the same period—presided over by the family’s coat of arms.

The central part of Torres do Allo, in addition to accommodating the uses and activities of the extended family of the Riobóo and Seixas, attempts to link the past and the present lineage represented by the Tower of Viexa and the Tower of Nueba respectively. A sobering and elegant architectural composition that produces an aesthetic impact on the visitor who arrives through the oak grove entrance, it is a vision not unlike the one experienced by sixteenth-century people for whom the Torres do Allo represented power, nobility, and the region’s artistic, political and moral referent.