Located to the left of the central body of the Pazo do Allo is the south tower: the Torre Sur or Torre Nueba. Although it was built almost two hundred years later than the north tower, between 1669 and 1685, it keeps a stylistic continuity with the first. An authentic replica of the Torre Norte, it seeks to create a symmetrical and balanced ensemble for the manor house as a whole. It exhibits an exceptional sensitivity on behalf of the owners and is one of the oldest and most accurate examples of respecting heritage in the field of restoration.

The Torre Sur was ordered to be built by Gómez de Riobóo y Seixas as an addition for his family due to a considerable increase in his social standing in favor of the House of the Riobóo: “We made the fourth and Torre Nueba to the southern part because we found ourselves crowded at home, which cost us more than two thousand ducats, [that] one and the other is for honor and profit for the Lord and he who is possessor of this House of Allo.” His father, Antonio Gómez de Riobóo had married María de las Seixas y Lousada, heiress to the House of Cabana, thus uniting the wealth of the two families. Thanks to this economic resurgence, Antonio de Riobóo initiated the restoration of the north tower, which his son would complete with the construction of the second tower and the central building. 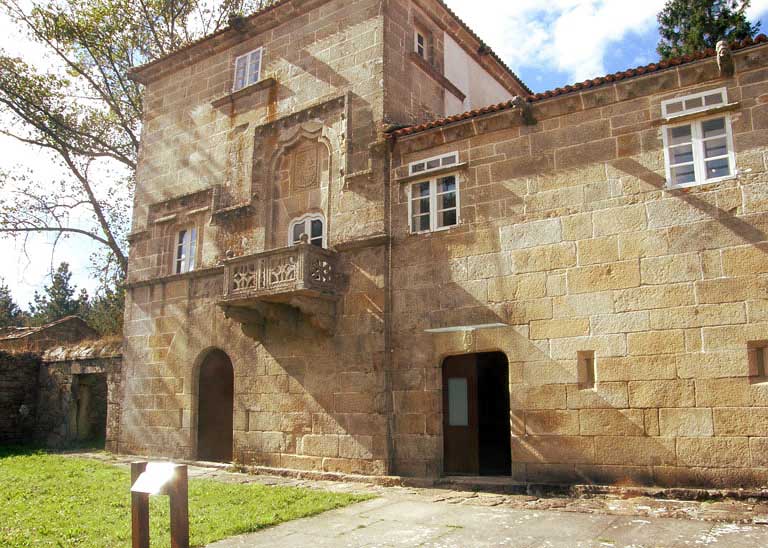 In so doing the line of Riobóo manages to flaunt their status of nobility. From that time onwards it had a close relationship with the religious powers of the time, since Maria de las Seixas was the sister of the Archbishop of Santiago, Francisco de las Seixas y Lousada. This fact is key to understanding the exceptional nature of how the façade of the Pazo do Allo are a similar style of many religious Compostela’s buldings, and in the shield of this tower appears the Compostela’s star.

The Torre Nueba is taller than its northern counterpart. Although it conserves the Torre Norte’s late-Gothic style, it incorporates baroque elements like moldings with vegetative motifs making up the window frame, and which served to hierarchically differentiate the building’s two floors. In the main window, presided over by the families’ coat of arms, we find a baroque-style balcony with latticework supported by zoomorphic corbels (a donkey and an eagle). The Torre Sur is crowned by breathtakingly crafted gargoyles that recall the dragales visible in the streets of Santiago—in the Casa das Pombas, the Casa de la Parra or the Casa del Cantón del Toural, for example—all ornamented by Diego de Romay. The last of these was also owned by Gómez de Riobóo who at that time held the position of Sheriff Major of Santiago de Compostela and its archbishopric. 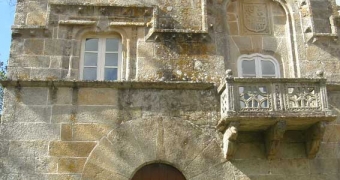