The Towers of Allo, or Torres do Allo hold many stories inside their walls, as well as outside of them. The surroundings of the Pazo do Allo conserve several constructions which date back hundreds of years. Tightly bound to nature, these correspond to different functions of the harmonious social organization of a typical 17th century Galician manor house. Throughout our tour of the exterior, and making up a marvelous ethnographic ensemble, we can discover windmills, sheds, fountains, Galician granaries, a splendid dovecote, and what are known as Casas del Curro—the houses of Curro. 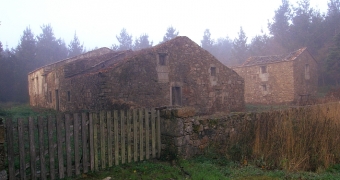 Gómez de Riobóo y Seixas, in addition to building the Pazo’s southern tower, oversaw an important important remodeling of the entire surrounding area and a new organization of the land to favor its agricultural use. Beginning in 1669 numerous annexes and walls were constructed in Allo designed to foster the new economic push encouraged by the Lords of the house. Among these were the fourteen colonist’s houses located on the areas of the former farmyard, of the “Curro.” These were the homes of the workers of the land who were increasing in number with the new influences stemming from the nobility of the House of Roibóo.

Sorry, this entry is only available in Galician and European Spanish.[ + ]