Torres do Allo is a building full of secrets and mysteries. In addition to its architectural value one must take into account all the artistic details it is decorated with and which necessitate a tour of this building, rich with 500 years of history. It is rife with coats of arms, gargoyles, corbels, balconies, windows, arches, arrow-slits, borders, lintels and many more details that add value to the already impressive Pazo do Allo. All those elements are analiysed detailment into the bool of Sánchez García, Jesús Ángel “Torres do Allo: Arquitectura e Historia del primer pazo gallego”, edited by the Deputación of A Coruña (2001).

The military past of the fortress of the Altamira (of which the Riobóo were vassals) gave way–with the campaign of the Catholic Monarchs to remove the castles of Galicia—to the manor houses that are today known as pazos. Nevertheless, the warlike spirit is still preserved in these great manor houses, indicated by the inclusion of the coats of arms on both towers. Such granite reliefs had as their mission the demonstration of the power of the families that owned the manors by means of perfectly encoded heraldic symbols. A sample of this is the shield that we find in the Torre Viexa and which represents the Figueroa, Vilardefrancos, Moscoso and Riobóo clans. The latter can be identified by a castle with a door from which a bramble grows, later exiting through a window.

In the shield that is found on the Torre Sur or Nueba, constructed almost two hundred years after the first, we can glimpse the important alliance that the Riobóo established with the House of the Seixas. Thus, it contains the coats of arms of the Caamaño, Lousada and Seixas clans—represented by five pigeons—as well as the star of Santiago, referring to the Compostela Archbishopric, who participated actively its construction, as well as that of the façade. We also find another shield in one of the arch’s gates with the emblem of the Caamaño or Leis, formed by five spears. 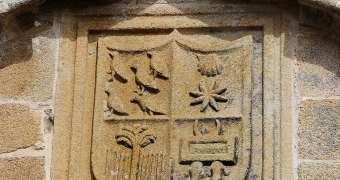 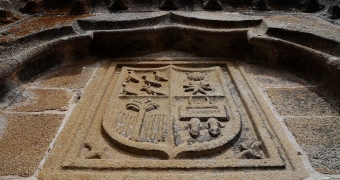 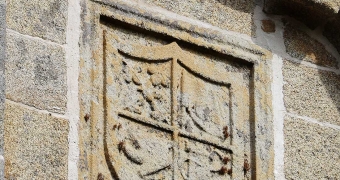 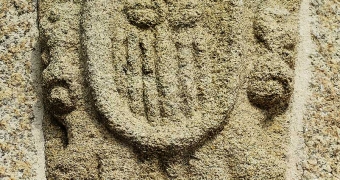 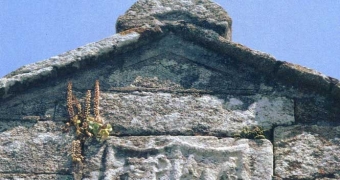 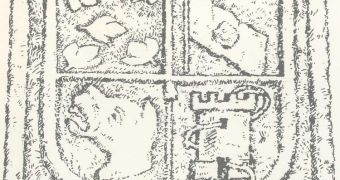 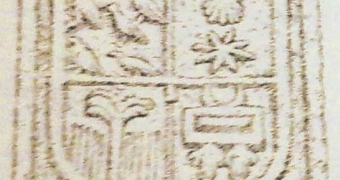 There are many figures that we can discover at the top of the Pazo do Allo. From its cornices hang stone representations of bodies with dogs’ heads. Of particular note here are the gargoyles located on the south tower, in the figure of dragons, as well as one very complex human sculpture on the drainage spout. 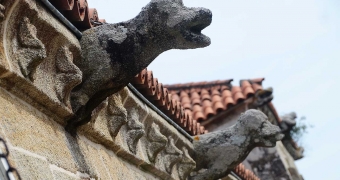 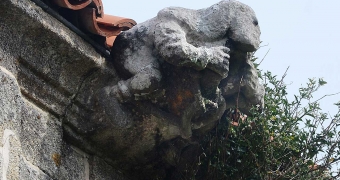 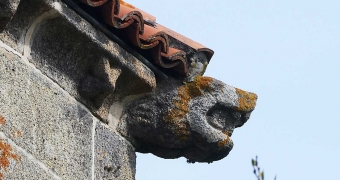 Also noteworthy are the corbels supporting the balcony of the south tower, quite similar in craftsmanship and intent to those that we find in the balconies of the façade of the Royal Hospital of Santiago de Compostela. In this case we can see two zoomorphic figures, the body of a donkey with the head of an eagle, and a female figure with different ornaments. In the north tower we find gargoyles with figures of birds on their lateral façade. Inside the building we also observe a carved bear head in a ledge located in the main hall. 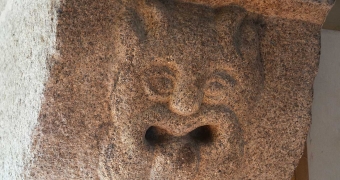 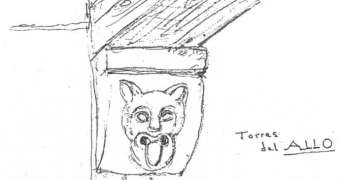 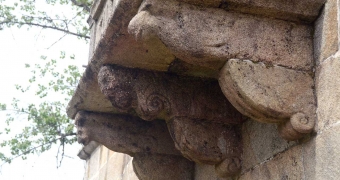 The windows are very important elements in the Pazo do Allo. There are several types and functions. From the defensive arrow-slits—like the one located in the north tower that takes the form of a cross—to the elaborate French windows that end in a baroque balcony off the south tower. Although some researchers consider that because of their ornamentation the Allo windows are Manueline, the fact is that they belong rather to the aforementioned Late Gothic. Stylistically rich and profusely adorned, these windows are an amazing sight. The borders that frame their spans, the coats of arms that crown them, and priceless finishes such as the stone cross from which the Torres do Allo derives its logo are ample reasons to devote some time in our visit to contemplate these exceptional details. 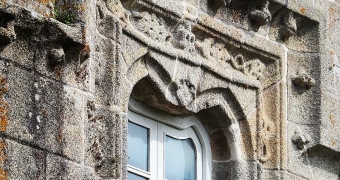 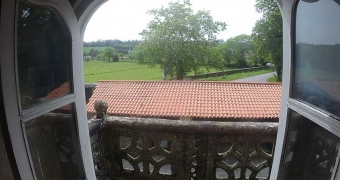 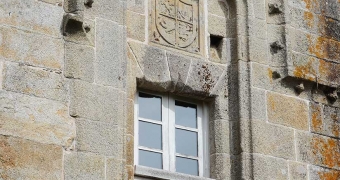 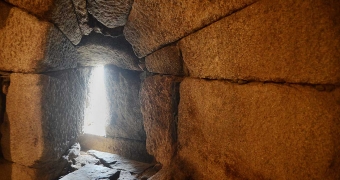 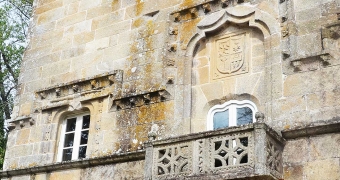 The variety and craftsmanship of the door and window arches of the Torres do Allo are also worth mentioning. We find exceptional mixtilinear arches in the large window of the north tower, as well as a stunning mullioned arch in the adjoining window. Also noteworthy are the ogee arches exhibited on several doors of the Pazo do Allo, especially over the main door, unusual in that it has a reversed key stone—an element which is extremely rare in 15th century Castilian architecture. 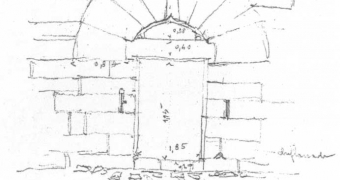